Holiday food is always fun, unless of course it's your last meal and you're on death row eating it right before Christmas. That can't be fun. Now with that said, to change the subject, what does a log cabin, a snowman, a sleigh, penguins and an igloo have in common? You probably said, "Snow or cold weather." Okay, you're right, but when you're through reading this blog you'll be able to say, "Holiday fun foods." 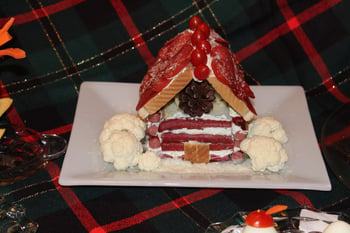 Let's start with the log cabin. It's a pepperoni log cabin. It was inspired by the witche's words in Hansel and Gretel, "Nibble, nibble on my house, who is nibbling like a mouse?"

To make the cabin, you'll need a loaf of white bread, eight sticks of pepperoni about 12" long, a package of sliced pepperoni, a package of cream cheese and a cup of Fage (Greek yogurt). To make the mortar, mix a cup of cream cheese with a cup of yogurt and season to your taste by adding garlic powder, onion powder and salt (stay away from any colored spices as you'll want the mortar to be white).

Cut the pepperoni sticks in half for the six" logs, cut off the rounded part of two slices of bread for the roof and put them in the oven at 200 degrees to dry them out. Cut the crusts off four slices of the bread and cut them into squares that will fit into the middle of the cabin for support. (You'll need more support for the roof and you can use more slices of bread cut smaller and smaller, or a roll works nicely.) Build your log cabin using the mortar mixture (don't even try to put slots into the logs so they fit together, you're going to eat the thing, not live in it).

To make the roof, put the dried bread slices in place using the mortar mixture for "glue" and dab a little mortar on the pepperoni slices (shingles) and starting at the bottom of each slice, lay the shingles on in rows right up to the peak. (Be liberal with the mortar.) Use cherry tomatoes to adorn the peak of the roof. Use cauliflower around the cabin (it sorta looks like bushes covered in snow.) 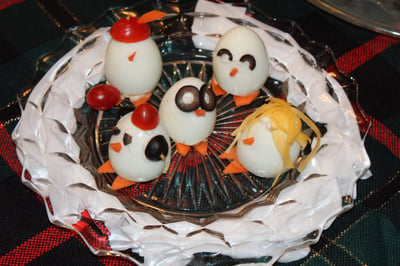 These penguins are deviled eggs in disguise. To get the yolk out of the hard boiled eggs, slice the the fat end off each egg. (Be careful getting the yolks out, you don't want to break the whites. You can use a sharp knife point to break up the yolks.) Make deviled egg mixture (Google if you don't have one) and fill eggs. Decorate with olives, carrots (beaks and feet) and cherry tomatoes. (The feet are made from a thin slice of a fat carrot with a wedge cut out to make separate feet. 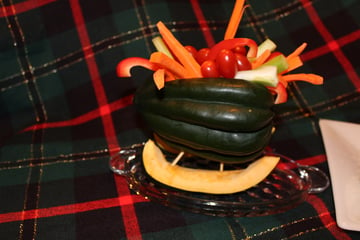 To make the sleigh to hold veggies, use a Denmark squash and cut two of the ridges out of the squash and clean out all the seeds and squishy stuff around them. (You can bake the squash after the party the next day.) Use the ridges for runners attached using long bamboo skewers. Once the runners are attached, use pruning shears to cut the skewers that are sticking up inside the sleigh. Notice there are red sweet peppers in the sleigh. They sort of look like un-striped candy canes.

To make the snowman, you'll need a round loaf of bread and four smaller rolls. You'll need to 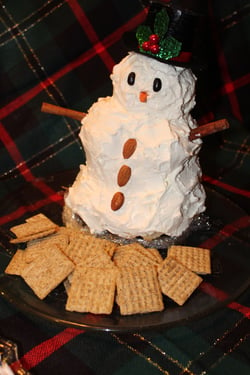 make dip to smear all over him (you can use the Fage and cream cheese mixture and add cream to make it more like frosting) and decorate him using cinnamon sticks for his arms, carrot for the nose (duh) almonds for buttons, coffee beans for eyes (or come up with better things to make him look the way you want him to look; there's no official way to make a snowman).

These holiday foods went on the road last week and appeared on live television in Portland, Oregon. When you watch the video, you'll see the back of the snowman, because the dip was left off to show the snowman's skeleton to help you see how to build the base for the dip.

After the party when the snowman is scraped clean, cut up the bread in bite-sized pieces and place in a baking dish. Sprinkle a cup of grated cheese over the cut up dead man and pour six raw eggs, beatened and seasoned the way you'd season eggs to scramble. Bake at 400 degrees for 45 minutes or until eggs are cooked through. 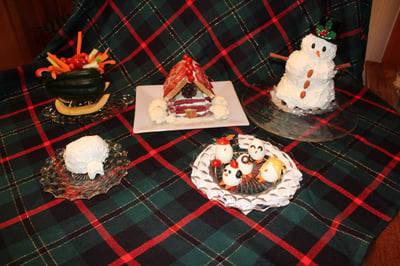 The igloo (in the front, left) would make a nice dish for a luncheon (each guest would get an igloo). You'll need to make either your favorite recipe for tuna salad, egg salad or chicken salad. Depending on how many igloos you're going to make, slice off the bottom of round, hard rolls and hollow-out (you can save the bread that comes out for recipes calling for bread crumbs). Fill the holes with the mixture of tuna, egg or chicken and place rolls on a piece of lettuce (hole down). Smear igloo with the mortar you made for the cabin and the snow you made for the snowman. The entrance to the igloo is just a piece of a stalk of celery.

Now it's time to watch these foods come to life on television! Just click up on that group photo to watch the show and you'll get a much better idea for serving these creative holiday foods.

NOTE: These ideas were first presented in "The Phony Gourmet" cookbook which has 75 creative recipes you'll never see anywhere else! "The Phony Gourmet" is on sale for $5 plus postage and handling. This hardback book will be a fun part of your cookbook collection and 75% off is pretty sweet. To purchase just click on the cover: 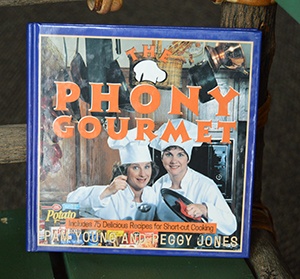 Have fun through the holidays!

"A happy life is just a string of happy moments. But most people don’t allow the happy moment, because they’re so busy trying to get a happy life." Abraham/Hicks