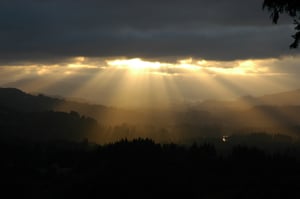 The sound of the impact has taken up a permanent place in “audio files” in my brain as metal slammed into metal (the police estimated the car was going 60 miles per hour when it hit us at a standstill). On impact our car lurched to the right instead of straight forward which would have put us onto the freeway in the path of that semi-truck I was waiting for, and it hit a freeway light post 45 feet away.

Both cars were totaled.

Someone wrapped me in some kind of canvas material as I was so cold in the winter, evening air. An ambulance soon came and took us to the small, rural hospital in Tulare, California. My husband, and human seatbelt, was fine except for the tops of his feet which were bruised from being under the front seat when we were hit. I was in excruciating pain on the left side of my abdomen and when we got to the hospital, they feared I had a ruptured spleen which they proceeded to proclaim it could be fatal. The combination of fear and pain was in a range of emotion I’ve never again experienced, not even in childbirth.

I was, at the time, a Christian Scientist and in case you don’t know, Christian Scientists believe in radical reliance on God. That translates into using prayer, and only prayer to heal. I’d seen, and been part of many healings throughout my childhood. I believed prayer would heal my body and the pain would go away. But when I was unable to reach that place of knowing, I knew I had to call Mrs. Piele, a Christian Science practitioner (it was 2:30 in the morning).

Through sobs, I told her I was in horrible pain and that they said I might die. She talked with me for a few minutes and her voice calmed me down a little. In an unruffled and authoritative voice she said, “God is with you right now and right where that pain is. All is well, Pam and I will continue to know that truth for you until a healing takes place. See if you can rest now.”

I’d called Mrs. Piele from time-to-time when I’d seem to be in over my head with a physical problem. I remember one time in high school, I had a temperature and a horrible sore throat and I’d been praying, knowing that wellness is a constant and that disease has no power when we know that wellness always is. Sometimes the truth, even though it’s the truth, is just words and that’s when I’d know I needed help from Mrs. Piele. That particular time she said, “Pam, you stand up in righteous indignation to that sore throat!” Then we prayed together and when we hung up I said to the sore throat, “You hideous nothing, how dare you try to make me believe in you. Get behind me you stupid nothing!” The sore throat and fever instantaneously disappeared!

That’s what I thought was going to happen this time too. But it didn’t! The pain intensified! There I was alone in this dimly lit hospital room, on a sterile, stainless steel examining table, in a hospital gown washed in some kind of antiseptic solution and strapped down so I couldn’t move around until they could attend to me. I’d refused pain medication (Christian Scientists don’t believe in taking pharmaceutical drugs). The two men who were in the car that hit us had gone through the windshield and they were both in critical condition and in surgery most of the night.

I panicked! I started crying out with the pain and the utter shock that Mrs. Piele’s prayers didn’t work as they always had. An angelic nurse came in and asked me if she could do anything for me. She looked like a nurse straight out of the wardrobe department at Universal Studios. Her dark skin and hair made her sparkling white uniform (complete with the nurse hat) appear that much whiter. Her hair was in a bun at the nape of her neck and she was very tall and looked to be an American Indian.

I said, “I have horrible pain on my left side and it’s getting worse and worse.” She reached down to my left side and placed her hand right where the pain was. I could feel the coolness of her hand as she held it there for what seemed about a minute. The pain gradually subsided and when it was completely gone, I told her so and she said, “That’s good. Rest now.”

I think I slept after she left. When the doctor was finally able to attend to me he said, “Well you certainly seem better.”

I was way better and when I explained what had happened, how kind the nurse had been and how when she touched my left side, the pain gradually subsided, his only response was, “We have had no female staff on duty through the night.”

Fast forward 50 years, I had to have some tests done to see if my kidneys were fine (I am no longer a Christian Scientist although I do believe God’s power to heal is beyond western medicine’s) and as I lay on the examining table the attendant did an ultrasound. She noted a large area on my left kidney that looked like someone had taken a big bite out of it and there was scar tissue. She asked me if I’d had something happen in the past to perhaps produce that. I instantly thought back to the accident on my honeymoon. I think the pain was not from a ruptured spleen, but a damaged kidney and now I had visible proof that I was instantly healed that night when the nurse came. My kidneys turned out to be perfectly healthy, but because of the ultrasound, I was able to see what a miracle had taken place on December 1, 1963.

I absolutely know that we are never alone, that God is always with us and that well-being is natural. In an instance when our faith falters, prayer causes us to focus on wellness which is in harmony with God and healing has to come.

I believe we are given whatever it takes to have our faith restored. In my case, I needed to be visited by what I would see as a real person and I believe that nurse is one of my guardian angels, using her ability to get through to me in my moment of need.