A few years ago my son Michael and his wife Meredith were invited by the FOX network to go to the Super Bowl and Terry and I were invited to babysit the two grandchildren Jack age eight and Brooklyn age eleven. I have such fun with these two! (They're probably 2 and 5 in this photo of them taking a "dry" bath.)

The first night we were with them, when it was bedtime they both wanted me to tell them a bedtime story. Since they slept in separate rooms I sat in the hallway with the light on so they could both see me if they sat up and it was easy for them to hear me. I love to make up bedtime stories because I never know what I’m going to say myself. I guess I should say Nelly (my inner child) loves to hear my stories or maybe she's the one who makes them up? Whatever, I love to do it. 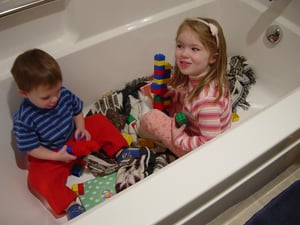 Once upon a time there was a wonderful family that was happy and healthy. There was a mom and a dad and a boy, eleven and a girl eight. (I reversed the ages for the story so the kids wouldn’t think this story was about them.) The family lived way out in the country and the mom home schooled the two children. There was one small genetic problem with the family; they were born with bunny ears. Beautiful, long soft bunny ears. The parents raised the children to be thankful for their ears. They showed them pictures of human ears and of course their ears were much better looking because human ears are just plain ugly!

Sure enough, on the first day of school, the boy was out on the playground and a nasty, mean girl came up to him and said, “Hey rabbit ears, want a carrot?” The boy ignored the wicked girl, but she wouldn’t relent. “Hey, can’t you hear with those big ears or are you just stupid?” She was just one of those people who is intolerant of people’s differences.

At this point in my story, Jack, my sweet eight-year-old love, said, “Was she a Republican?”

Now I was already on the floor so I didn’t have far to go in my hysterics! I laughed 'till I couldn’t breathe and then I said, “Jackie, did you know I’m a Republican?” Both children sat up in bed and stared at me as if I’d said, “Did you know I’m a murderer?”

When their liberal parents came home, I forgot to tell them about the incident, but a few weeks later I was on the phone with Michael and remembered to tell him what happened. He laughed and said, “You know Jack came to me a few days after you guys left and said, ‘Dad, did you know Gramma’s a Republican?’ I told him I did.”

Then I said, “Michael, you know it might just be the right time to explain to the children that we need to respect each other’s differences. They were stunned when I told them I'm not a Democrat. I would've had less reaction if I'd revealed, long, soft bunny ears.” It was quiet on the phone.

PS If you'd like to know the benefits of reading and telling bedtime stories just click on Jack. 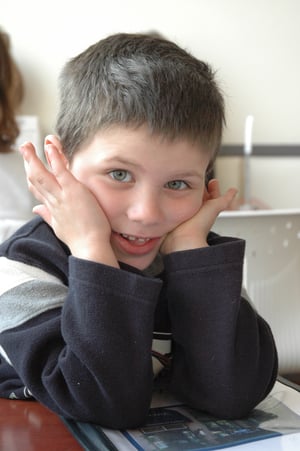 P.S. I wrote a fun book of silly poems for children and it makes a great way to send your little ones off into a good night's sleep. Just click on the cover to purchase.